Meet the hosts of Your Private Journey, Dave and Max.   Interview by Darren Johnson

Pre-interview, Darren asked a friend to describe each man, in just a few sentences…

Someone said about Dave:   There are probably 20 things I could tell you, but here’s a good example… Do you remember the scene in Pulp Fiction when Samuel Jackson and John Travolta stop their car in a suburban area to get rid of a dead body? They call this guy, Mr. Wolf – the problem solver. This is the kind of person Dave is… when you need help, he’s right there, efficient and clever. I love him for that (and I don’t mean getting rid of dead bodies!) Actually, Dave’s one of the most fun gentlemen I know. This guy: he’s helpful, he’s a true lover of travel, and he’s surprisingly quick to get naked.

Someone said about Max:  When I think about Max, I picture him with a guitar in his hands. He’s a huge fan of the blues, and can play or listen to music for hours. He finds his inspiration in the works of Robert Johnson, the Ramones, and Jimi Hendrix.  He is very passionate about sailing… I think being on a ship and sailing brings him a sense of freedom. And he’s absolutely fascinated with the marine world.  People love him for his loyalty, his open mind, and his supportive nature.  And good long chats! 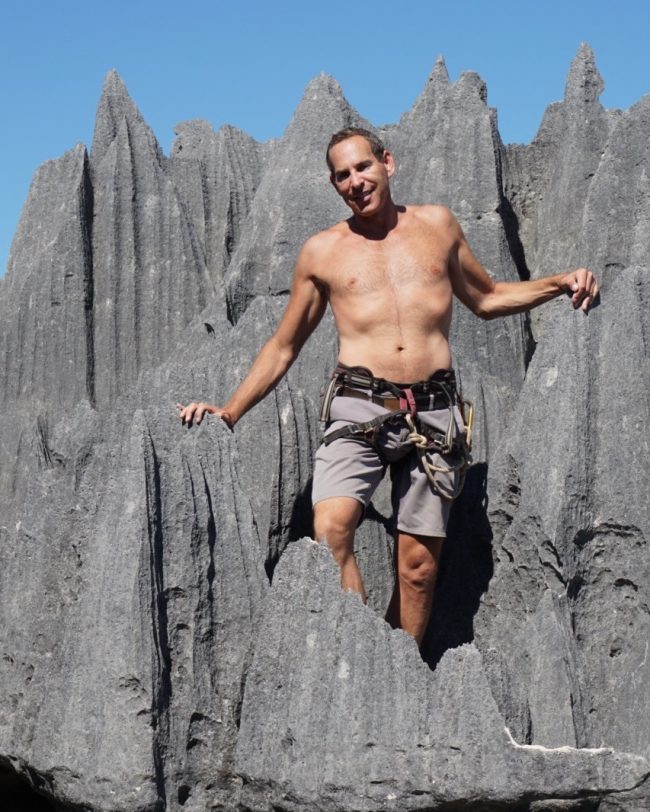 Darren: OK, guys… how did you two meet? How did you come up with the Everything To Sea concept?

Dave:  We met at a pier on the eastern shores of Bali… waiting for a boat to bring us to the island known as Nusa Penida.  This was several years ago, and I was traveling there with my boyfriend, and he was traveling there with his longtime childhood buddy (they’ve been friends since they were five years old).  The four of us immediately clicked and ended up hanging out together for several days – and then the friendships strengthened over time. I’m a cultural anthropologist by trade, but while working in the realm of museums, I became an escort, too.  As a social scientist, the ability to enter a “secret” world fascinated me, but the activities I was doing outside the bedroom held my interest too.  I’d been taken on a few naked sailing cruises and kept thinking how the concept was amazing, but also how it could be improved upon.  In discussing my ideas with Max, he first listened intently… and then three months later, he contacted me to say he wanted to partner with me.  We carved out the concept together, and about nine months later, Everything To Sea was born.

Max:  I remember the next day, after we traveled to that small island, the four of us went on a snorkeling trip with a small local fishing boat. We had drinks, food, and later snorkeled with manta rays. I think we were also getting naked at some point. At least partially 🙂 We had so much fun. It was like an Everything To Sea trip in a mini version, organized within two hours. I used to think it was then that the seed got planted in Dave’s head… Anyway, a couple of weeks later he called me up and explained the concept to me. After giving it some thought, I was really buzzed by the idea – and told Dave I wanted to do it with him. 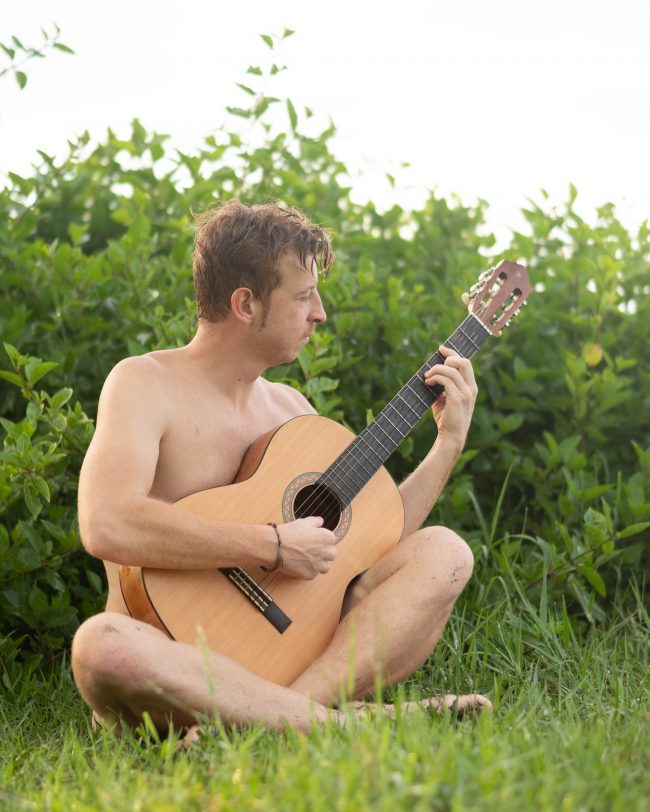 Darren:  What is your sexual orientation?

Dave:  I’m bisexual, and – although it’s not only rare to find a man who’s really out about being bi – I’m also 50/50, which is also rare.  In other regards, I’m a versatile switch, who also plays with kink and fetish, can flip at the drop of a hat, and is more open- or poly-relationship-oriented, than monogamous.

Max: I would describe myself as sexually fluid.

Darren:  Tell me a little about the crew who would be on the ship.

Dave: Our crew is made up of all local men, who range in age from 20 to 40.  Their backgrounds may vary, but most are from either the islands of Sulawesi or Flores.  Generally, guys from this area of the world are shy at first, but friendly.  We appreciate that their work ethic is professional and responsible, although they also have a relaxed approach to each day, so there’s a general calm that exists amongst them.

Max:  I have to say, the crew is a very interesting mix of men with strong cultural backgrounds from different ethnic groups. Some of them grew up in small villages.  People call them sea gypsies. Their fathers and grandfathers were already living off the ocean. I’m always amazed by their knowledge and wisdom. They’re also in good shape from their work on the boat… 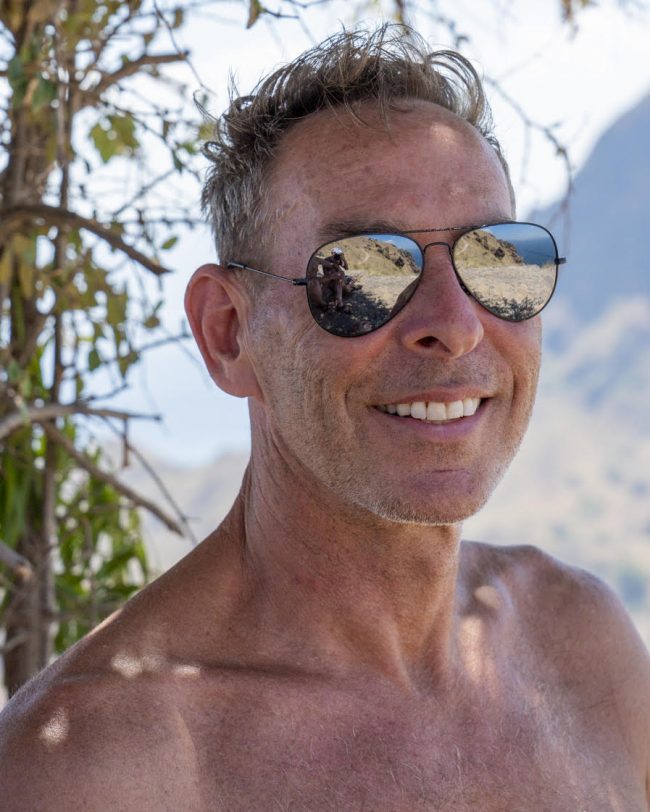 Dave on the trail, Padar Island

Darren:  What can guests who sign up for Your Private Journey expect?

Dave:  Three of us traveling together, having our own unique experience.  The fact is, it varies based on who we’re with.  One trip was solely focused on us all being relaxed and chill, day after day, simply enjoying each other’s company.  Another trip was geared for the client, who’s a photographer, and wanted to focus on taking pictures.  A third trip helped a guy who isn’t out:  he’d wanted to be around guys, and this was an opportunity for him to do so without it being a “scene”.  And a fourth trip was all about snorkeling and swimming and beaches, naked twister, naked cocktails, and having naked fun.  Obviously, we bring our own personalities to the experience, and we honestly enjoy getting to know another individual, in a non-judgmental setting.  It’s fun to meet new men – otherwise, we wouldn’t offer it.  The response to Your Private Journey has been tremendous – and as far as I know, no one else is offering such a thing.

Max: I always see Your Private Journey as three close friends who haven’t met yet, traveling together.  Almost like in a novel, when three friends share the same curiosity for life and each other, and head out for the trip of a lifetime. I know this sounds a bit dramatic. But in a nutshell, this is the concept of Your Private Journey.   Sometimes, it can be intimate and therapeutic for men.  When someone inquires about Your Private Journey, we like to have a phone call with him first to clarify details and get to know each other.  I can’t remember a trip when we didn’t share stories and laugh together.

Darren:  Tell me something interesting or quirky about yourself. 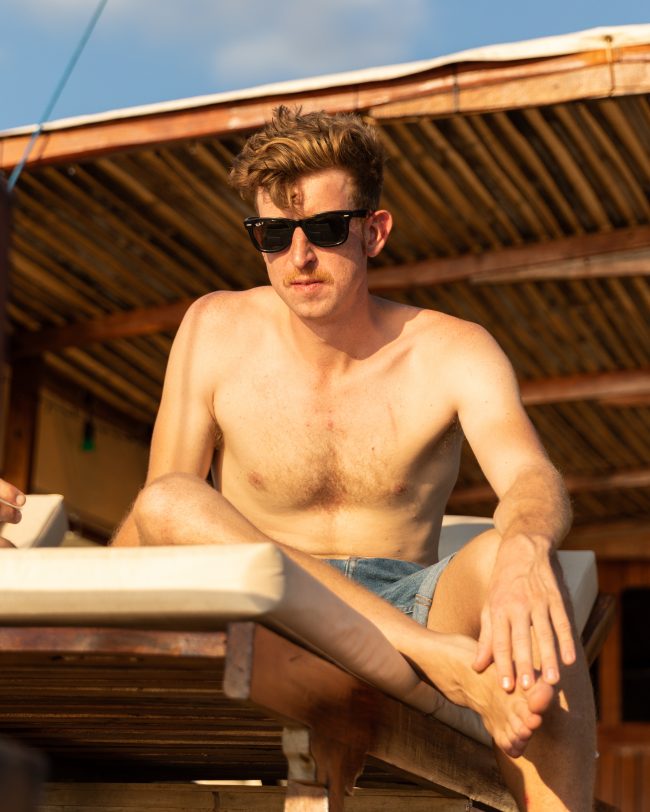 Max, chilling on the sea

Max:  I am terrified of spiders. When I was younger I tried to find a way to get a handle on my fear of these insects. You know like some people always tell you: “You have to face your fears in order to cope with them”  So I caught a big spider in the basement of my parent’s house and put it in a terrarium. I started feeding the spider with insects and was watching it closely while reading books and watching documentaries about them. They are actually very clean creatures. My spider had a dedicated corner for the remains of its meals. Very sophisticated, I thought. I am not as terrified anymore when they are in the same room. But, still, I never would touch one.

Sadly, the spider died when I fed it a bee.

Darren:  What have been the worst and best things about quarantine?

Dave: Let me answer from a global perspective.  I’d say the worst has been the mental stress that a huge amount of people have been under.  The best? Perhaps – for those in the technologically-developed world – their ability to reconnect with nature.

Max:   For me, personally, the worst thing has been that feeling of being trapped. I haven’t been able to visit my parents or friends, and that’s been tough. The best thing has been that I’ve realized something about myself: I never get bored! I feel like I’m always busy with things. It’s been great to discover that I can actually entertain myself.

Darren:  Well, you guys can certainly entertain others, too!  This has been a lot of fun. Thanks for the chat!