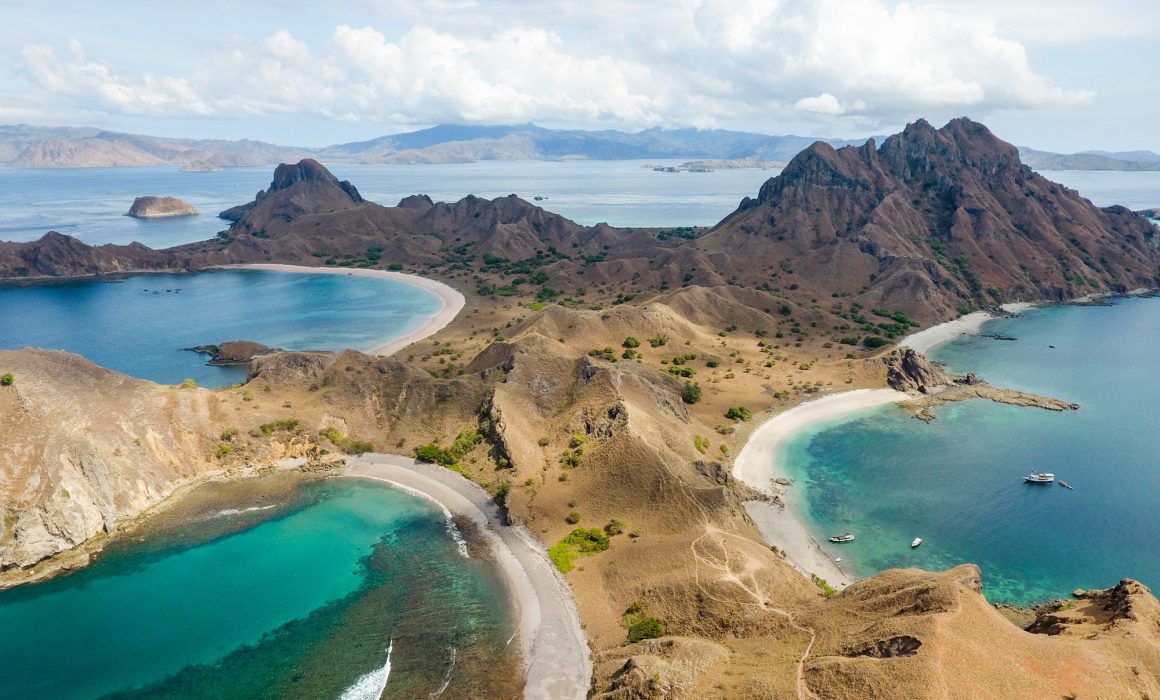 Our itinerary takes you to what some might say is the most majestic hike you’ll ever experience. Padar Island is the third-largest island in the Komodo Island chain. It’s an island with a truly unique feature: three beaches with three different colors of sand! It also has an elevation just shy of 400 feet, making for extraordinary views. Check out this post we found on weseektravel.com – “Padar Island Hike – Best Sunrise Viewpoint in Indonesia?”

Perhaps you’ve already seen a photo of the iconic, Jurassic landscape atop the Padar Island hike viewpoint in the Komodo National Park. In fact, if you type in “Komodo Island” in Google, it’s probably the image that will appear first.

From the summit, you’ll have a sweeping view across Padar Island and get to witness the famous multicolored beaches that surround the island.

THE PADAR ISLAND HIKE: Recently, the Komodo National Park has built a wooden pathway making the start of the hike much easier. From here, it’s only a short but fairly steep ascent to several grassy viewpoint hills where you can catch varying perspectives of the incredible island.

If you’ve got a camera, or even if you possess a slight interest in landscape photography, then the Padar Island hike will certainly be your type of adventure. I’m not one to usually talk up a viewpoint that’s already been photographed millions of times, but this place was so breathtaking that it’s hard not to rant. Maybe it’s better to let the pictures do the talking.

PADAR ISLAND HIKE DIFFICULTY: Yeah, yeah, but how long is the Padar Island hike? Don’t worry, the hike really isn’t difficult, and anybody with general fitness shouldn’t have a problem. To reach the summit from the beach, it shouldn’t take much longer than 20 minutes.

HOW TO GET TO PADAR ISLAND: Padar Island is fairly remote and therefore will require some kind of organized boat trip to reach. This is especially true if you want to experience the Padar Island hike viewpoint for sunrise.

The busiest time of year is July and August and therefore a great option is to visit the Island in the shoulder seasons of April to June and October to November.

During the Wet Season and the first months of the Dry Season, the view from the Padar Island hike is a refreshing shade of green. The later on in the year it gets, the Padar landscape dries to an almost orange color, which in my opinion is still a spectacular contrast with the blue ocean below.

If you’re looking to learn more about our itinerary, check out this link.