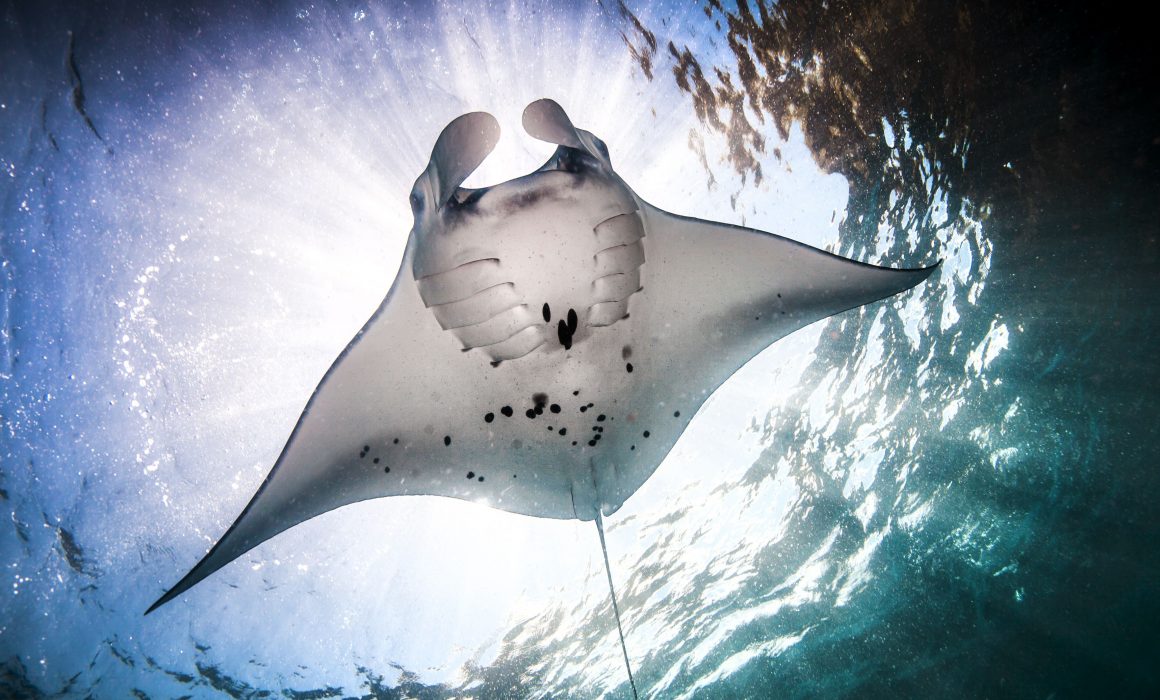 While most of us like to think our own one-eyed monster is the largest creature of the deep blue sea, the reality is our entire physique shrinks compared to massive manta rays. But do not be intimidated, these gentle giants simply spend their lives gliding through the surf. Manta rays are a common sight on Everything To Sea’s voyages within the waters surrounding the many islands of Indonesia.

These ocean giants can weigh well over 2,404 kg (5,300 lbs) and span up to 8.8 meters (29 feet) from tip to tip. Manta rays are easily some of the largest fish in the world’s oceans. Their large size might deceive you into believing their meals are equally proportioned. But the reality is, much like the world’s largest fish, the whale shark, manta rays specialize in eating tiny plankton. With their mouths wide open, they filter feed as they swim. You might have noticed those large mustache like-appendages (oooh, Zaddy!) They’re not just for looking foxy – the flaps help direct food into their mouths.

No fish for brains here! Manta rays have some of the biggest and brightest brains of any fish species. Studies have shown they are capable of recognizing themselves in a mirror, and even creating mental maps of their environment – an indicator of a highly developed long-term memory.

Until as recently as 2008, scientists learned there are in fact two different subspecies of manta rays: the giant manta ray and the reef manta ray. Cruising the clear waters of Indonesia are mainly the smaller reef manta rays. But don’t let that comparison fool you, this subspecies can have a wingspan of up to 3.3 meters wide. More coastal by nature, reef manta rays can be spotted while sailing with Everything To Sea.

Alas, both sub-species of manta ray are considered vulnerable to extinction. Overfishing poses the greatest threat. Demand for their meat and even more so their gill plates, has driven this decline. Each year, thousands of manta rays are killed for their gill plates. With a slow reproductive rate, they’re unable to survive this rate of overfishing and soon might disappear from our world’s oceans.

Thankfully in 2014, Indonesia banned the fishing of these creatures. Instead, the government identified an even more lucrative and sustainable approach: tourism. Studies have estimated that eco-tour operations generate so much revenue for local economies that one single manta ray in a tourist hotspot can generate up to one million dollars in its lifetime—but is worth a mere $500 dead.

Everything To Sea‘s cruises provide snorkeling activities with chances to see manta rays with your own eyes. In fact, Manta Point is one of our regular destinations on our voyages. Manta rays come regularly to this point to get “cleaned” by suckerfishes (fish that suck? sounds interesting…) Imagine hanging out with these guys in their very own spa – while nude!